A Berlin Photographer in Arles: Anton Roland Laub and his series “Of Titans and Geniuses”

As a photography lover I always wanted to go to the Rencontres Photographiques d’Arles. Every year something unexpected prevented me from going there. In Berlin, at the beginning of this scorching summer, a phone call and I drove to my friends in Arles.

The city shines and so do its visitors. On every street corner, in cafés, under the blazing sun, people whisper. One word appears again and again: “Les Rencontres”. The festival has just begun. The city whispers before the sound of its countless visitors, whether loyal or new, professional or amateur.

Arles celebrates the 50th anniversary of the “Rencontres”. On the programme: 50 exhibitions. My program: four days and evenings to enjoy them.

“Les Rencontres” is a sporting event, both physically and mentally. Which exhibitions should I visit? Impossible to see them all in a few days. The selection is very difficult. Especially since chance sometimes leads us to a place we didn’t think we would visit.

On the third day the tiredness is noticeable. 15 o’clock. The sun is shining. No breeze. I walk through the streets and narrow alleys. Without destination. I lost my program. At the street corner a name appears: FOTOHAUS | PARISBERLIN. Away from the official ways of the “Rencontres”, the association “ParisBerlin>fotogroup” presents the exhibition “Mur(s) / Mauer(n)” as part of the “Festival des Voies Off”, which brings together photographers from France, Germany and various European countries.

2019, 30 years after the fall of Berlin wall. This was the symbol of the Cold War, but since its collapse other walls have been preserved or built in recent years in some European countries in response to immigration. 14 walls have been built in Europe over the last 10 years: between Greece and Turkey (2012), Hungary and Serbia (2015), Norway and Russia (2016), among others.[1] The theme of the exhibition is topical, political, social and intimate. As part of the official programme of the Rencontres, another exhibition entitled “Les Murs du pouvoir” is dedicated to the walls that now stand in Europe.[2] 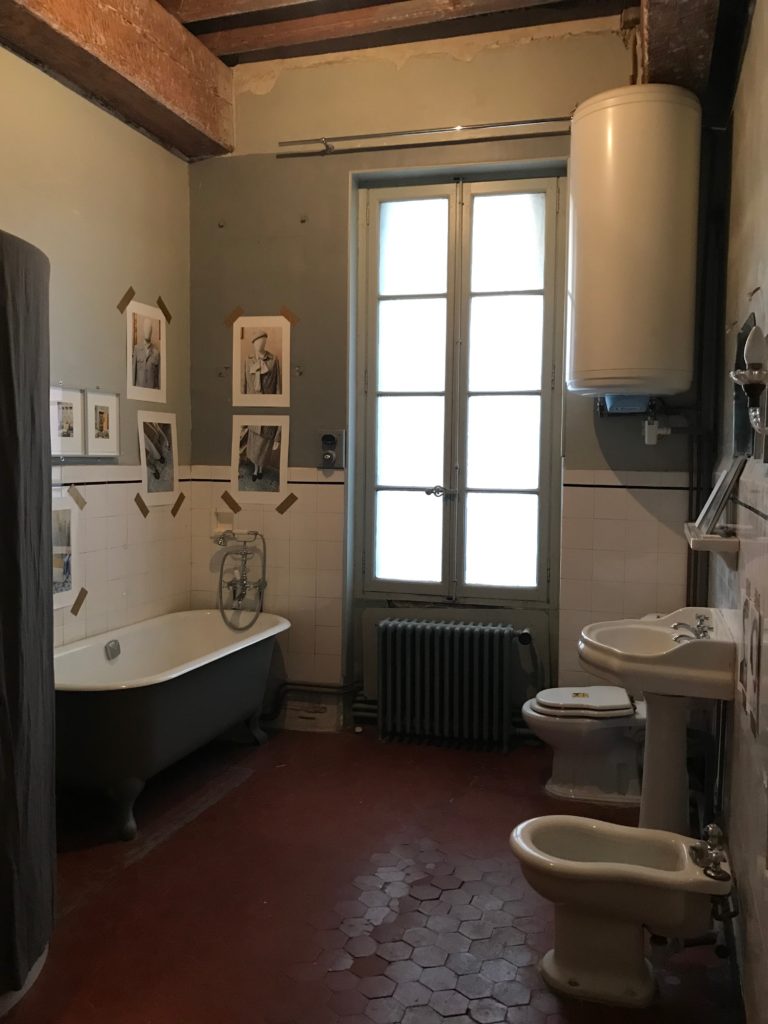 Influenced by this theme, I stroll through the exhibition, which shows the positions of various galleries and artist collectives. The old abandoned building, in which the works are shown, has no doors. Only fireplaces, tiles and bathrooms have survived. The building is huge. It extends over several floors. In each room, photographs. Too many photographs. My eyes have difficulty concentrating. My skull is spinning. I continue the ascent. I feel a little lost. I don’t know where I am going and what I am looking for.

And in one of those narrow bathrooms, my eyes stop, caught up in the photographs of the Berlin artist, Anton Roland Laub. 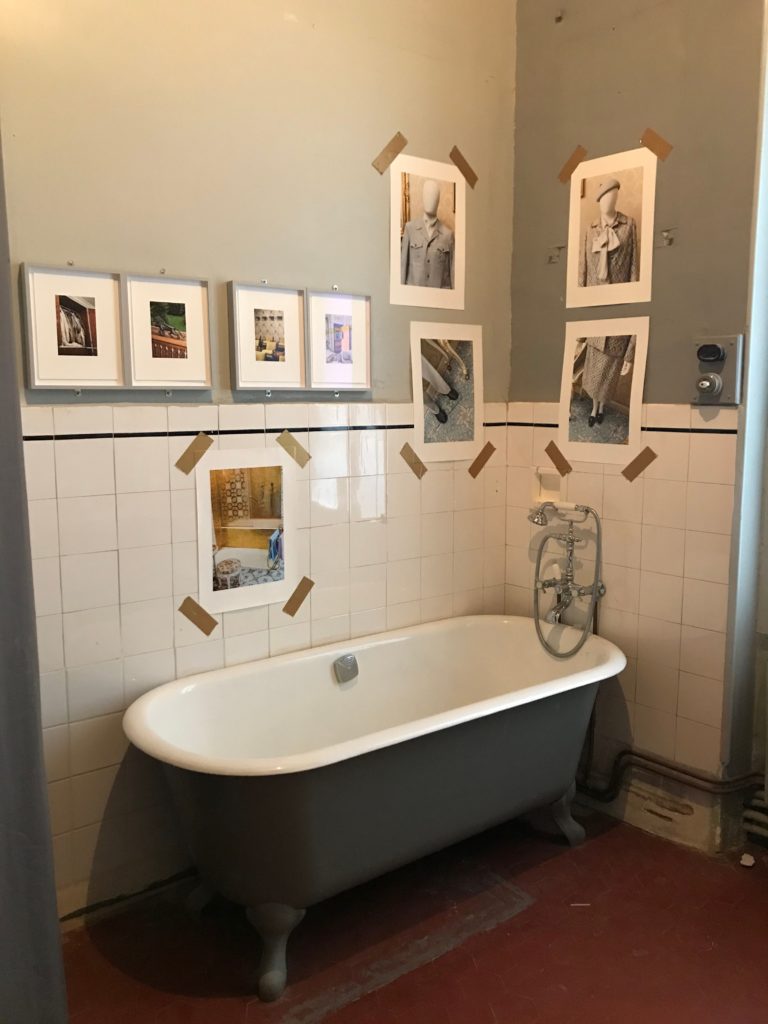 The space is so narrow that it seems almost impossible to get an overview of the installation. So why does my gaze get stuck here? Curiosity. I find it interesting and almost strange that all the elements of the bathroom are still there, even though the whole building is empty. I am curious to see how this room is used to highlight photos. Is there a connection between the bathroom and the theme of the photographs? Will the atmosphere of the bathroom affect my view of the photographs?

The photographs distributed on two facing walls seem to have been hung quickly and roughly on the walls: a single and two large brown adhesive tapes at the ends, some construction tape. This hanging and the location highlight the theme of Anton Roland Laub’s photographs: a Mise en Abyme. Above the bathtub, a photo of a bathtub. The photographed bathroom is equipped with a golden bathtub and a golden towel rail on which two towels lie. The luxurious view is enhanced by the photograph of a bronze statuette and a cupboard filled with furs.

I look for people in vain. The way the photographs were taken is reminiscent of an inventory that shows everything in one room. They do not represent life, but memories, the past. Is it the place that gives them this aura?

The bathroom I am in is old. Apart from the furniture, there are no personal objects like a towel or a toothbrush. The room was definitely abandoned. This atmosphere influences the way I look at the photographs.

Anton Roland Laub’s work and the place remind me of Urban Exploration (Urbex). This phenomenon has been fashionable for about ten years, for example Berlin and its surroundings have become an attraction for Urbex: the abandoned Villa Goebbels on the banks of Bogensee or the old ice factory in Köpenicker Viertel. Many photographers go to these deserted places to immortalize them.

And my walk in this building gives me the impression that I am in such a place. Because, apart from my friend, I almost didn’t meet anyone in the building. The building is in a bad condition. The spiral staircase is almost dangerous. But there was an entrance and the exhibition currently lives in this building. 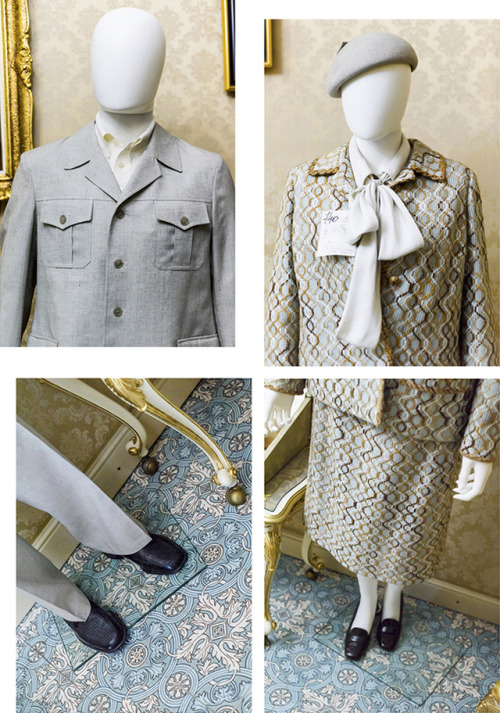 Is this really what Laub presents here? It is hard to say. This building really plays a lot with my first impression. Is it a montage? Four more photos show two dressed models: a man and a woman. A couple.

In my opinion, never dressed models, luxurious objects like furs or bronze are left in an abandoned place. The different objects in the photos, the way they are presented and especially the two models make me think that the photos were taken in a museum. 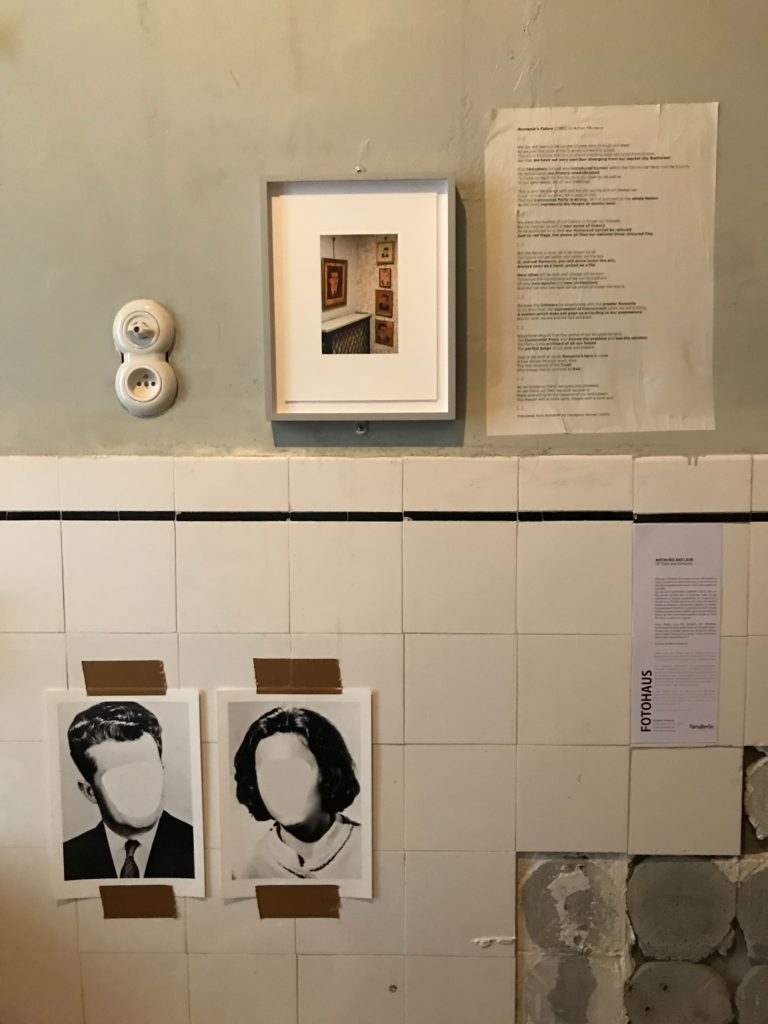 The answer is on the second, opposite wall of the room. Laub presents photographic portraits. The former dictator of Romania, Nicolae Ceausescu, is recognizable. So these photographs immortalize Ceausescu’s former residence, Palatul Primaverii, now a museum. The opening of this museum in 2016 was controversial, because the former inhabitants and the dictatorship will not be mentioned.[3]

Does Laub want to underline this by presenting photos of the two spouses whose faces have been erased? Does it reflect a desire to forget this past?

The Romanian photographer Laub, who now works in Berlin, experienced the Ceausescu dictatorship. To take these photos, he went to the former Palatul Primaverii. The title of his photo series “Of Titans and Geniuses” refers explicitly to the couple. As he himself writes: “State artists praised Nicolae (and Elena) Ceaușescu in nationalist odes as ‘The Titan of Titans’ or ‘The Genius of the Carpathians’ “.

With this series, the photographer testifies to a time not far from now, when Romania was isolated and excluded from the rest of the world. After the Second World War, Romania was occupied by the Soviet Union. From 1974 until his death in 1989, Ceausescu was president of the Socialist Republic of Romania. Ceausescu’s repressive policies led to the uprising of the people in 1989, to his death sentence and that of his wife.

The theme of the exhibition is very strong because it is very topical. 1989 was not only the year of the fall of the Berlin Wall, but also the year of Ceausescu’s death. 2019 marks the thirtieth year since the end of the Romanian dictatorship. The photographer’s series raises questions about the future we want for Europe. After the end of the dictatorship, the opening of the borders in Eastern Europe and the desire to build a united and peaceful Europe, some countries are closing their borders today. People who wanted to flee their country with closed borders are today closing their borders to prevent people fleeing wars or dictatorships from finding refuge there. Have we learned a lesson from the past?