Exit of the elevator: surprise. The walls are not white, as they have been usually since the birth of the White Cube – an idea theorized by Brian O’Doherty at ArtForum in 1976. They are not uniform: immense images cover them. Are the walls the works of art? These black-and-white pictures look like large photos stuck directly to the wall. The entire exhibition area, including three rooms, is covered by these photographs. From one room to another, some photos are repeated, but presented differently. They illustrate the same place or the same person, but from a different angle. Wall photos, like wallpaper, placed next to each other. Without any connection between them. My eyes are lost, my mind too: where am I? 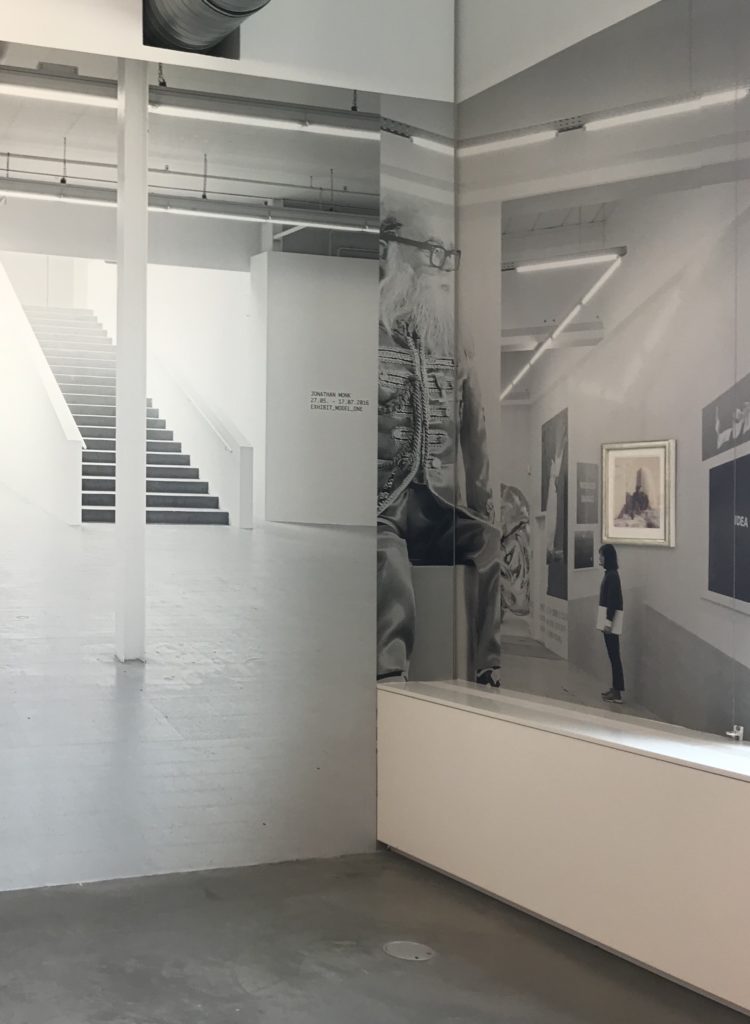 Is it a mise en abîme of the place: to expose the archive of a life-size exhibition? The visitor would then walk through past exhibitions. Some of the photos seem to represent other exhibitions. Several elements suggest this: the presence of sculptures and paintings in neutral locations reminiscent of exhibition spaces. The same goes for the wall photograph of a white wall with the name of the artist Jonathan Monk and dates that could refer to the opening text of an exhibition dedicated to him. This mise en abîmegoes far beyond the simple theme of these photographs. Depending on where I am in the room, it seems larger, even infinite. The floor of the room seems to extend beyond its real space, as the photographs merge with the floor in colour and expand it in perspective. Geographical space merges and almost makes me lose the concept of real space. 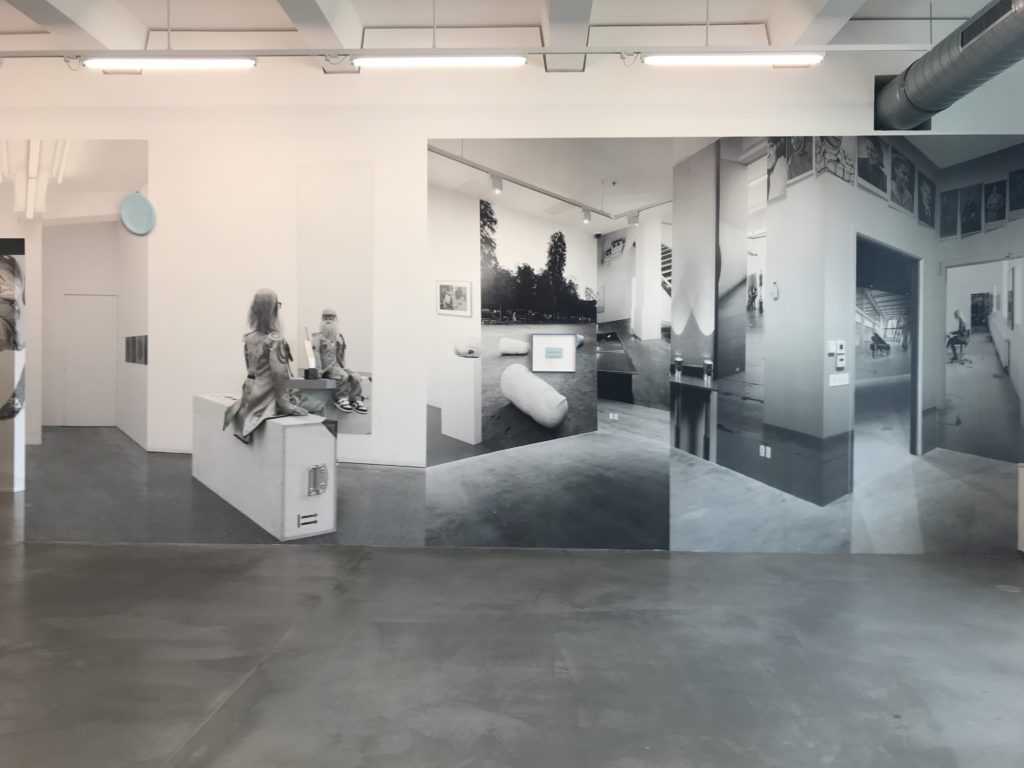 My eyes get caught by the windows and the view of the city. It reminds me of the geographical reality. In the distance, the Fernsehturm towers above the building line in the sky. I am still in Berlin, at KINDL. However, I will almost ask myself to what extent the artist played with the space. The large windows offer a wide view of the city and almost give the impression that this view is a colour photo integrated into the exhibition. Is the artist’s goal: to lose the visitor? To disorient him?

The artist has succeeded in creating an environment that captivates the visitor and his imagination. Each photo is fully integrated into the room’s frame. It almost seems as if the works are physically present in the photographs, like sculptures. Or a man sitting on a bench opposite a work of art (top picture). He is probably also in a museum or exhibition space as I am at the moment. The scene refers me to my own condition of an observer and in this case a voyeur. I become an observer of my own situation. Jonathan Monk succeeds in creating a mirror, a duplicate of the visitor. Is this a humorous wink of the artist’s eye, who tells me: “Look what you look like when you observe an object”? 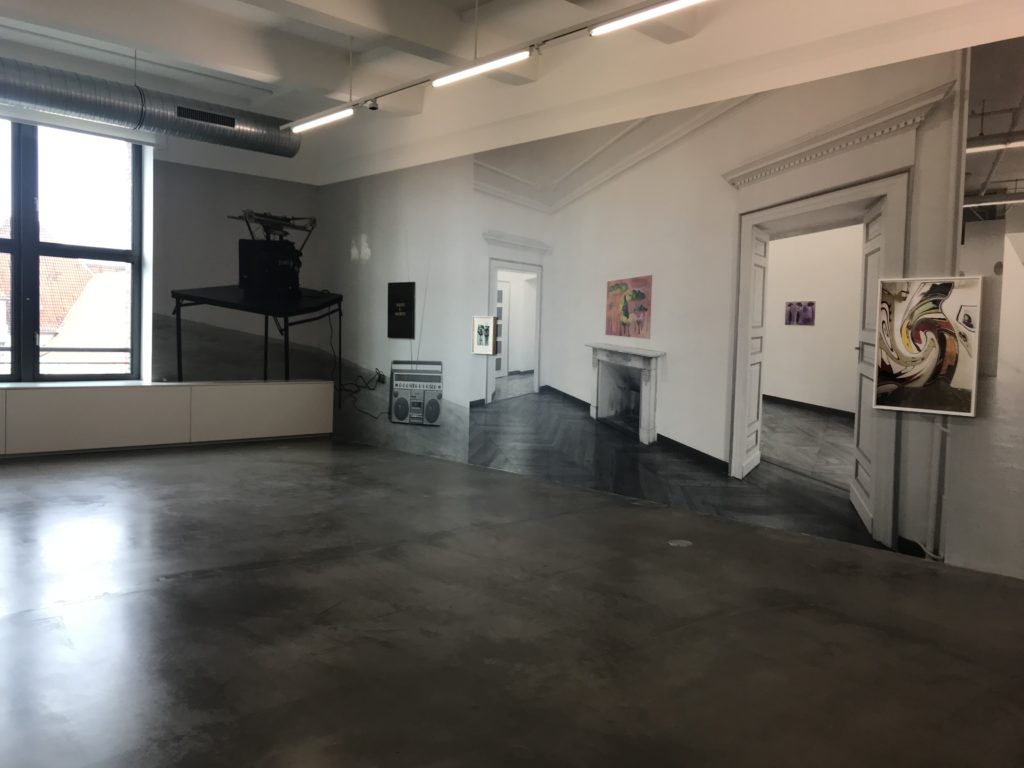 As I approach one of the photos, I realize that it contains a real work of art. The object is physically present. The temptation is so great that I would like to touch it to make sure of its real existence. The place where I am prevents me from doing so. My free spirit that has travelled through these photographs suddenly remembers that it is in an exhibition. The object is sacred, untouchable. I do without my desire, observing from a distance and adapting my gaze to its presence. The attempt to integrate it into this space, to penetrate into the spirit of the artist. An impossible action.

In each of the three rooms in which Jonathan Monk’s works are housed, one work is placed on a photographic panel. Are the photos simple wallpaper? Does the artist want to mark a break with the trend of the refurbished exhibition space with white walls? The artist doesn’t just hang works on the wall, he creates a real dialogue between the exhibited work and the photographic wall. Just as I felt drawn into the photographs and lost my geographical reference points due to their perspective and arrangement in connection with the floor of the room, the objects seem to be present in the temporal and geographical spaces of these photographs. The artist seems to have paid much attention to the works shown in the photographs. The works are manifold: a painting, a telephone, a key, a framed photograph, an architectural drawing. 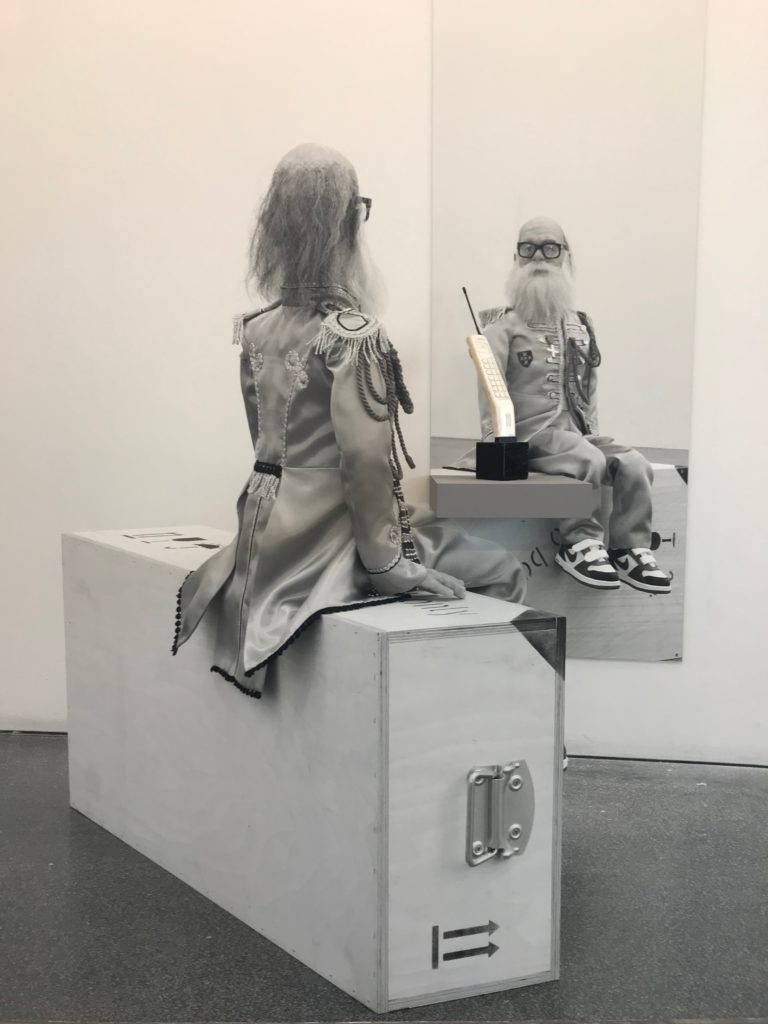 What is the place of the artist in this exhibition? Is he the creator of the works, the photos or both? Did he design this scenography? Monk sees himself here as a curator, artist and collector. The exhibited works are part of his personal collection. The exhibition in which I move is a kind of game with the spectator: a game of perspectives, a game of identification of works’ authors. The visitor is not a passive person. To really immerse yourself in the exhibition, you have to analyze the space, reflect on it and look at it in other ways: directly or indirectly. Monk forces the visitor to be more than just an observer. There are no texts. No explanations of his work. Only a note at the entrance provides information about his work and the identity of the artists exhibited. I prefer to dive into the place beforehand, allow myself to be guided by my imagination, my thoughts, and urge myself to question myself. Was it really the artist’s goal, or was it only my imagination that led me to interpret the artist’s intentions in a certain direction with regard to the purpose of his exhibition?

Monk redirects the interpretation of the works of these great modern artists – Louise Bourgeois, Bruce Nauman or Sol LeWitt – through their installation and comparison with other works. Below the illustration of the showroom, this game of distraction shows something. The wall photography shows the exhibition of paintings. In the middle of these paintings, a framed photograph – physically present – shows a portrait of the artist Alighiero Boetti. The described scenography allows this presence not to interrupt the reading of the other paintings. On the contrary, it seems to emphasize it. Building on this, the artist curator blinks in this installation. The mural shows paintings by Sol LeWitt, including Dinner Plate and Drawing for a Sculpture in the next room. A double wink, as Monk also shows a work by Alighiero Boetti, Orologio Annuale. 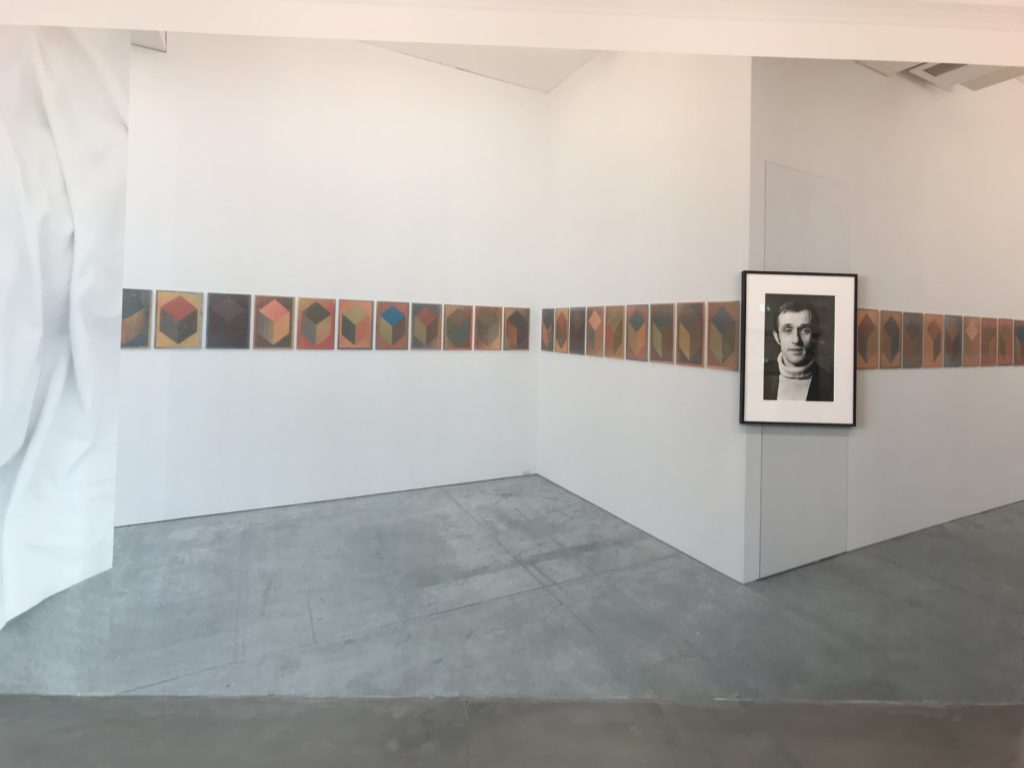 Jonathan Monk’s work is therefore here swapped with that of the curator. The title of the exhibition reminds us that it is dedicated to him, but it is provided with “plus invited guests”. This reference refers to the works hanging in the exhibition, none of which is a creation of Jonathan Monk. His works turn out to be these oversized wall photographs in which he uses the works of other artists. It breaks with the norm that an artist has to exhibit his own works. Monk plays with the boundaries between the figure of the artist, the collector and the curator. He makes use of all three.

Reflection on Identity: Iranian Artists at the Pergamon

“As We Used To Float” Julian Charrière
1
Recommend
Share