Around the old tempel
People dance everyday, they
sing, they celebrate joyfully.
Little fires are lightened
to keep the giant warm.

And he opens secretly his doors, which are not even wrinkled, when new treasures have grown between his floors.

I have never wondered what it looks like in the underground spaces of Schoenefeld or Tegel Airport. Actually, I always try to spend as less time as possible in an airport. The Tempelhof airport, on the other hand, awakes my interest. The building remains permanently closed and the field, the former airfield, is always full of people chilling, grilling, playing and trying out all kinds of hobbies. Of course the history of the place is very strong. So that everyone is pleased when the gates of the building are opened for a short time to host an event. This airport inspires a strange fascination in everybody.

The project „˘Tempelhofer Wald“ offers a series of events inside the airport: Mainly lectures and performances. Among other things, there are three artistic parcours that lead through different areas of the building. I could only participate in excursion no. 3, also called „Luggage room“.

We are a small group of visitors and follow a guide who leads us first to the main entrance of the airport.

There we stand in front of the information desk, behind which the former baggage claim can still be seen. At the information desk the artist Haluk Atalayman is working on his installation called IN FORMATION. He fills the small transparent cabin with flexible narrow boards; the cabin is already so full that I only realize after a few seconds that the artist is actually in it. Since the line forms complex curves, Haluk Atalayman has to move slowly and carefully within his installation. He holds one end of the line in his hand and continues to fill the space by pulling the board. It is not possible to see where the line begins because several threads come from the ventilation in the ceiling and get lost in the cabin. Haluk Atalayman wears a hard hat. Is it loud in his desk? What could possibly be loud? We observe his slow progress from outside and stand in the silence of the former airport. It seems that two parallel worlds meet for a short time without being able to interact directly. I am hypnotized and follow with full concentration the paths of the line that spreads infinitely.

After a while, our guide starts walking without saying a word and we follow her, eager for the next encounter. A few meters further the artist Martina Hefter sits in a small alcove where she tries to furnish an imaginary bedroom. With a measuring tape she records where the bed, the wardrobe, all the furniture would stand. She has a few coloured items with her: among other things two blocks, a small horse and a plastic tree. She places them in the room and indicates what these objects could embody. Sometimes they stand for physical elements (the blocks are the wardrobe, etc.) and thus underline the idea of the hypothetical bedroom, sometimes they stand for abstract concepts such as the dark, the light, the love, the funny or the confusion. Martina Hefter’s dancing movements and her constant alternation between childlike and serious ways of speaking place the entire performance in the realm of the staged game. There is no possibility of direct communication neither here.

When we leave the room together with our guide, the artist looks at us with an honest smile. She has left her role and that smile hasn’t left me yet.

We stop in front of a long corridor where the musician Susanne Stock sits on a chair. As soon as we stand in front of her, she plays an unusual melody on her accordion. On her feet lies a sheet of paper with a poem by Louis Aragon.

The music is disharmonic and arouses curiosity. It is a piece by Annette Schlünz – Journal n° 6 -. The longer she plays, the deeper I understand the poem. The words seem to meet the path of the notes in order to make sense together.

We walk on, a couple of stairs down and we reach the underground rooms of the luggage storage. Probably where the luggage was being sorted back then. The old conveyor belt is still intact. It looks as if nothing has changed. Only the dust and some broken windows are evidences of the past time. The silence is interrupted by the sound of a contrabass. This is the first time that we share the room with a perfomer. In this empty no-man’s land John Eckhardt plays excerpts from the self-composed piece XYLOBIONT – ear to the wood. Although it was not even conceived for this purpose, the acoustics in the room are amazingly beautiful. The melody is fascinating because it is sometimes very soft, sometimes disharmonic. The result is a strange impression, a kind of seductive instability that wonderfully reflects the singularity of the situation. The functional, concreted dusty luggage room meeting the sound of a contrabass. 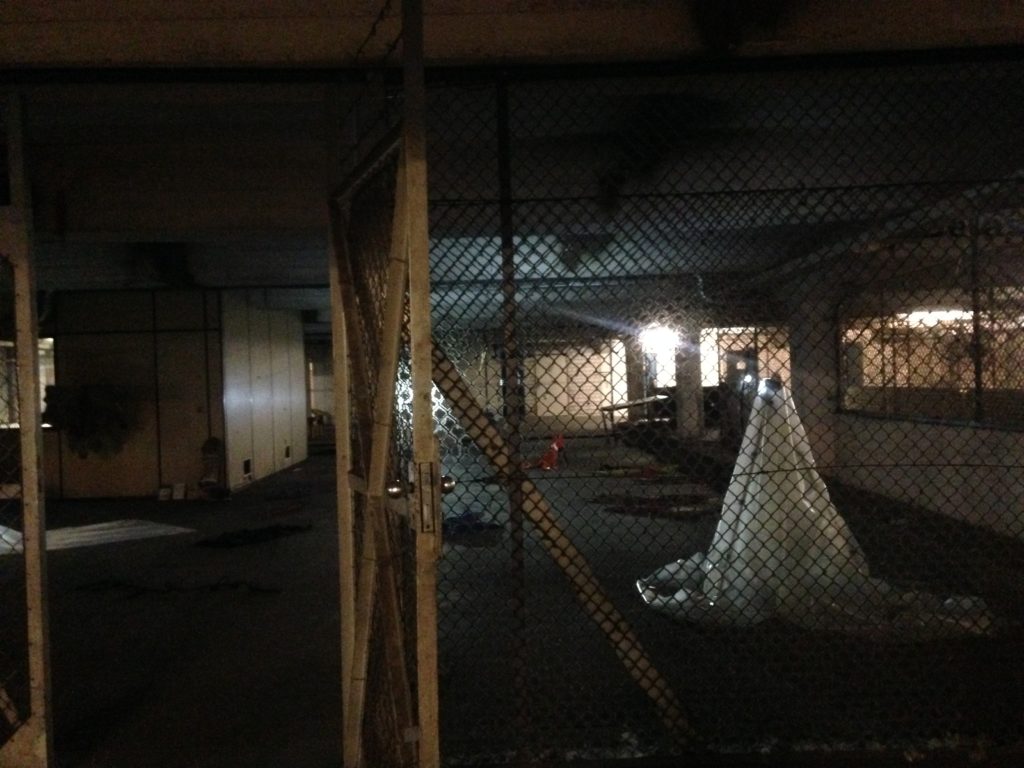 Then we’ll be led to Frank Willens‚ performance, In the Midst. The actor stages himself in a box training session. He stands alone in a room that is separated from ours by a wire mesh. He wears a red full-body suit and boxes against a sandbag. The bright lighting is blinding and makes it difficult to recognize the objects around him. After a few minutes he runs off, out of his cage, leaves the door wide open, disappears briefly and reappears a few meters away, runs on, further down into a kind of storage room where he disappears in the darkness. Suddenly we hear loud drumbeats and calls. The artist seems to repeat the same sentence over and over again; as if he were sunk in a kind of trance. Even if he is not visible to us, the common space of acoustics connects us. The drumbeats become more intense and with them the calls become more and more cries. He tries to shout louder, louder than the drum he hits. Through the gestures, the voice, the colours, the actions and the stroboscopic lights, the performance conveys an agressivity and leaves a feeling of incomprehension that is difficult to analyse.

As soon as Frank Willens‘ drum is silent, we have to turn our backs on him to see Anna Weißenfels‘ performance. This is played at the end of the hall. In the distance one can see the Tempelhofer field. A beautiful landscape, which is gradually darkened by the beginning twilight. In one of the corridors stands Anna Weißenfels, wearing a pale blue costume. The fabric is light and the cut is wide in the direction of the legs, so that the trousers shiver happily in the wind. Anna Weißenfels stands in front of a door between two corridors. She walks with loud steps, but remains in the same place. She gives impulses, but stays behind the door. Until all of a sudden she steps forward and starts singing. Her wordless song is characterized by her enchanting voice, which strongly contrasts the previous performance. Anna Weißenfels moves away from us singing loudly. She runs in the direction of the tarmac. Her voice remains close to me as she is disappearing. The increasing physical distance seems to be cancelled out by her singing and the magical atmosphere.

The next performance is located on the ground floor of the building. After a few steps we come across three mysterious persons. Peter Cant, Danilo Shramenko, and Mathis Kleinschnittger. They receive us in disguise and have plenty of items: balls, suitcases, shuttlecocks, towels, nets… We are given salt pretzels. According to the performer who gives them out, they are so salty that we will forget the heat to focus on thirst. Then we are given balls, props and clothes to wear. We are forced to play together. It’s the only performance in which we are actually actively involved. A performer plays music on his mobile phone, balls fly around everywhere, everyone smiles in this chaotic game. Gradually the performers interact less with us: each of them has found his own toy and plays alone. They remind me of cats, how they lose interest in playing together because they discover a new fascination for a rubber band or an old sheet of paper.

After this break we walk through a long corridor to almost arrive back at the starting point of the excursion. Our steps slow down as we hear a sound installation in the passageway. The piece is called Timber!, by the artist Max Kullmann. It is a mixture of amplified noises; it seems impossible to me to identify or even differentiate them. I hear, however, that the sounds belong to a different place. They were captured somewhere else, amplified, and placed here. The installation is aesthetically very minimalistic: it consists of loudspeakers lying on the floor of the long passageway. The artist remains unseen. So that one concentrates only on the relationship between the space and the sounds. The actual silence of the building emphasizes the singularity of the recordings. And the recordings underline the silence of the place, because they clearly come from a different context and from a different acoustic space. Thus the two elements of the installation – the space and the sounds – reinforce each other’s presence and peculiarity.

In the end, I find it very difficult to connect these performances and analyze them together. They have touched me in so different ways and have aroused so many thoughts that I hardly know why they work so well together. But maybe it’s not so important: Different kinds of lives grow together in the (Tempelhofer) forest, which support and complement each other. In the forest you don’t see the roots that connect the trees together. But you can always imagine them.

ON THE DISPOSITIVE OF MEDIATION: JÉRÔME BEL AND ISADORA DUNCAN

History of art or the art of writing history

“WE ARE NOT YOUR DEMOISELLES”, CANDICE BREITZ
0
Recommend
Share