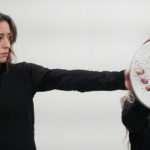 Fanny Gicquel : close to the cataract 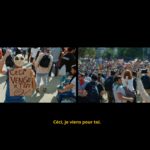 Silent Specific: the city as experi(ment)ence

On April 14, 1921, at 3 o’clock in the afternoon, André Breton and some other Dadaists made an appointment in front of Saint-Julien-le-Pauvre church in Paris. They did not come there because it was a place of worship, but because of its “banality”. The “banality” of the place, its choice in the urban topos had “absolutely no reason to exist,” says Breton.

Some time later, other outings of the group were not limited to the celebration of the “banality” of a specific site, but rather -far from that initiatory desire to “possess” an urban space- they were an action of walking; an action to inhabit -and experience- the logos (and not only) of the city.

The motive? The dérives (drifts). It is a matter, we are taught, of understanding the experience of walking in an experimental sense. Drifts are -here I paraphrase the Situationist International- an experimental mode of behavior linked to the conditions of urban society. They are an exercise that understands urban space as an open question, a space for walkers, a porous text, a mosaic of “unconscious and automatic quotations, offered without quotation marks” (Barthes).

I mention the above as substrate; as memory. As intertextual ideas that intermingle with the project of virtual interventions Silent Specific, curated by René Francisco (National Plastic Arts Award 2010) and art historian Dayneris Brito.

There is an idea, a notion that I relate -in an undeclared way- since my first approaches to the project. I am referring to “andarinaje”. This neologism is derived from the word andarín: that person who walks, moves. Who can and does it with pleasure. The andarin advocates walking as a method of existence (perhaps I should have written survival). In any case, his ontological fate is experience.

The walker inhabits the city. (Let us remember that, in a strict sense, to inhabit means to reiterate one’s presence in a place. If, on the contrary, this presence happens only once, what happens is a visit. The city is the habitat of the walker. To inhabit means to possess). His walking mobilizes the desire to possess what escapes him.

He knows that desire is lack, it is need (Anne Carson in Eros. The bitter sweet). The space of desire resonates around each architectural block. Above all, of those absent blocks. The Greek word eros also denotes “desire for what is missing”. The walker possesses the city and the city possesses him.

He is its bastard child.

The walker is suspended on an axis of paradox.

In 58 hints on the body, Jean-Luc Nancy states in number 35: The etymology of “to possess” would be found in the meaning of “to be seated on”. I am sitting on my body, a child or a dwarf on the shoulders of a blind man. My body is sitting on me, crushing me under its weight.

At the same time, we cannot avoid a blind spot: the andarinage (dis)possesses. The andarinage is a body, not a property. Even if he hesitates in ambivalence. The city is sitting on him, crushing him under its weight.

I am the walker.

Let’s say that this is how I sit between one space and another of the (fictional) city mapped by Silent Specific. I refer, here, to the notion of map in the sense in which Deleuze and Guattari analyze it in A Thousand Plateaus: the map as a “matter of performance, open, connectable in all its dimensions, dismountable, alterable, susceptible to constant modification. It can be broken, altered, adapted to different assemblages, […] constructed as a political action or as a meditation”.

I drift between algorithms.

I prefer the chase to the capture.

In walking, the hunt is furtive.

Silent Specific has an inescapable antecedent. I am not referring to its root (pivot). I am referring to a part of its rhizomatic body. I mean this: “any point of the rhizome can be connected to any other, and must be” (Deleuze and Guattari).

In a rhizome there are no points.

In a rhizome there are only lines.

In a rhizome there are no units of measurement.

In a rhizome there are only multiplicities.

A rhizome can be broken.

A rhizome can be interrupted (anywhere).

A rhizome always restarts along this or that of its lines, and along others. In 2012, during the 11th Havana Biennial, René Francisco, together with a collective of students that became known as Cuarta Pragmática, built in the vicinity of Calzada and 2nd Streets, in El Vedado, a metaphor and a critical instrument entitled Ciudad Generosa (Generous City).

This project consisted of “planning an ideal space or city; populating it with an architecture designed to recreate, subvert, and open ourselves to the transit of urban dynamics. Strangenesses that start from the usual nature of social imaginaries and artistic practices inserted in the flow of a community” to activate a sense of new reality, with its own notion of the urban”.

The above quote, under the authorship of René Francisco, which I extract from the statement of Ciudad Generosa, wants to insist on the instance of urban intervention that occurs when artistic devices -if we understand devices as orderings- invade the everyday order in the city, to break it physically and symbolically.

The everyday order, in terms of its form, operation and politics, is violated by performing instances of subjectivation. Both Generous City and Silent Specific bring back an idea of Michel de Certeau in The Invention of the Everyday: “Space is a practiced place”.

By “practiced” can be understood as “violated”. The street and its adjacent structures become space when the walker violates its rigid planning and subverts it as a power device. In other words: space becomes experience when shortcuts are taken. In urban space to take a shortcut is to assume the greatest dissidence.

The notion of space, as art historian Rosalyn Deutsche has proposed, always requires indefinitions. It is not obvious. It is not monolithic. It can be a city, a building. But it can also be an identity or a discourse.

In other words, urban space is formed from antagonisms, from conflicts, from “struggles”. Spatialization is nothing other than an exercise of conquest. And every conquest is an intervention. Space is not the product of that intervention; space is the intervention itself.

Under this need for intervention, to “activate a sense of new reality”, and to “subvert” in order to “open ourselves to the transit of urban dynamics”, and, in turn, to produce “estrangements” in the “social imaginaries”, René Francisco called for the Silent Specific virtual intervention project on June 19, 2020. In this call, artists were asked to select a potential space of creation on which they should project their work through an image or video and, at the same time, reflect on the instance of urban intervention to question and reimagine the social ordering of power.

The project was proposed as “a collective cry that expresses the multigenerational feeling of the nation, that presses the arteries of suffering at the tip of the present, and that publishes with an art of elliptical intelligences our disagreements, aspirations, our call of attention to equity and our proposal against mediocrity and injustice”.

More than sixty Cuban artists, settled inside and outside Cuba, participated in a collective exhibition that deployed in the public space, virtually, a kind of aesthetic cartography (I understand aesthetics, beyond its traditional understanding, with a trans-artistic meaning, as a science of sensual cognition) that dissents from a traditional repertoire of conceptions, images, perceptions and experiences of the urban. It also liberates the reified reality through the metaphorical expression of a new (fictive) reality.

After a year of its implementation, the exhibition has generated (other) forms of narration and signification of what we call “city”. Corners, streets, sidewalks, monuments, corners, facades were modified thanks to the use of visual effects and 3D technology. Silent Specic has perforated -intervened- the “dramaturgy” of the city from a position that implies an understanding of the public as political.

The public is not a neutral space.

The public is not a monotonous space.

The public is not a space for physical comfort; it is a situation of risk.

Public intervention must have the will to “construct public space, in the most abstract political sense of this notion” (Iana Stefanova).

A virtual intervention challenges the notion of reality.

A virtual intervention challenges the notion of spectatorship.

A virtual intervention is a ritual where the living is an imaginary hologram; where being there is a longing; where walking is a hallucination.

Each of the interventions that are part of Silent Specific is an extra-daily action that virtually bursts into the city. Each one of them brings into play the perceptive channels with which we usually relate to the urban fabric. Likewise, they produce alternate cities that expand from a resemantization, a juxtaposition of the city as a scenario of simultaneous senses (The city as a realm of signifying forms). Silent Specific, through a transfiguring gesture, imprints on the city new meanings to those given materially -to those imposed, we could say.

The works gathered in Silent Specific reveal a readjustment (parodic, perhaps) of the hackneyed concept of site specific. The site is replaced by the absence of the work in situ. The gesture, phantasmagoric in its essence, is a “silent scream” or “silent gesture” that produces expanded cities. Elastic cities. Permeable cities.

Even so, the project assumes inescapable rules of the platforms on which it is activated: Instagram, Facebook, YouTube. “Polished”, “obscene”, “pornographic” platforms, to use Byung-Chul Han’s adjectives. Nevertheless, there beats a power – sometimes – subway. That power is displaced listening.

That “silent scream”, that pause, that possibility of the acoustic, that resonance of the symbolic writing that is inscribed on a building or on a bronze head of Silent Specic. In spite of their marked visuality, they are interventions that propose to break our gaze.

This dialogue that is the urban architectural material, now (trans)fictionalized, becomes a possible space to read the intangible events. The silenced events. Specific events.

In Asian lands, Min Tanaka took walking to unknown places and consequences. Tanaka was one of the pioneers of Butoh dance. He set out to perceive the particular characteristics of the earth in different places. To achieve this, he crossed Japan, from south to north (from Kyushu to Hokkaido), dancing every day, sometimes two or three times a day, usually naked. He once remarked, “I’m not dancing in a place, I’m dancing a place”.

Before writing his poems, Ted Hughes experimented with various ways of capturing animals and birds and fish. When his enthusiasm began to wane, as it gradually did, he began to write poems. Something similar happened to me. Until very recently, every time I took off my shoes I would look at their soles. I felt a strange pleasure contemplating them for several minutes. Every day the black rubber showed me the wear, the trace of mobility. It was only later that I was able to write this, an essay on walking in a city; in a virtual city.

The walker, like Ted Hughes’ Bear, pays a price.

His price is everything.

Dayneris Brito
This article was first released in Rialta Magazine

Stay tuned of [mist] cooperativa de criticxs // Cuba news and posts by suscribing to our nesletter :