For a long time I considered Hugo Servanin as a Frankenstein doctor. Indeed, his tendency to postpone our appointments to “embalm his bodies” reinforced my idea that this was an artist with dementia as irrefutable as creativity. I was mistaken. Unlike Mary Shelley’s fabulous character, Hugo Servanin remains the sole master of his workshop. It is he who sets the framework within which he makes his creatures evolve and within which he himself evolves. And what a setting! The artist is only at the beginning of an endless work, that of creating a world with complex societies and plural individuals…

A plaster bust carrying on its back a flexible plastic bag that Hugo Servanin loads with water at the beginning of the exhibition. By filling it with liquid, he gives life to his work. Because with the pressure of water and the porosity of the plaster, the body slowly begins to sweat, water accumulates in the folds of the epidermis and as sweat flows, the plaster rots and takes on organic shades. Like Venus, who transforms the hardness of the ivory girl into a warm chest, the artist transcends her sculptures here, by means of water. But the analogy between Galatea and the works of Hugo Servanin ends here. Because it is not Pygmalion’s love that they explore when they wake up, but an internal war between a body and its fluids that, if they animated it, eventually pierce it and make it rot. The fight against bodily fluids, whether it is tears, urine, sweating, and so on, govern the organization of daily life. Yet, for Hugo Servanin, they are witnesses to the individual’s feelings in society because like stress or anxiety will make you sweat, sadness will make you cry and pain bleed.

From a simple three-dimensional work these works have become bodily entities, they exceed their qualities as statues. Their supernatural dimension is then palpable. Because their actions, even if they were originally motivated by the human hand, are now independent of its goodwill. Far from the majesty of a marble that surpasses the centuries, Servanin’s plasters “live” for the duration of an exhibition, then run out of steam. They have the charm and fragility of a morning dew, the miserable beauty of those bodies that are alive because they are dying. For the days go by; the wounds, the cracks pile up. Bodies must be cared for by caring for them. But we cannot fight against the ephemerality of an organism: when it dies, Hugo Servanin removes the water from the bag, dries the plaster and loads the resin bag. The mummified body then becomes a statuary of the moment of life. As light fixes the moment on the photosensitive surface, the resin crystallizes the body and with it, the present. To do so would be a mistake to reduce this last act to a simple conservation technique. For the whole religious and divine dimension of Hugo Servanin’s Work is nestled in it. By embalming his bodies, the plastic surgeon creates the rites of a religion without a declared divinity.

Because the giants gnawed away by fluids are only one of the body typologies that the artist proposes to us. This one declines a multitude of others with a leitmotiv: to put in resonance body sensations and the properties of materials. Thus, to signify fragility, the anatomy architect chooses porcelain. He moulds wrists, knees, ankles and neck, then forcibly pushes wood into the joints, creating a restraint at the edge of the fracture. Further on, they are steel frames, then muscles composed of foam and polyurethane, eczema prints… In short, a host of diverse individuals. 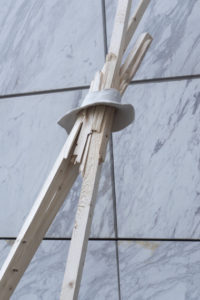 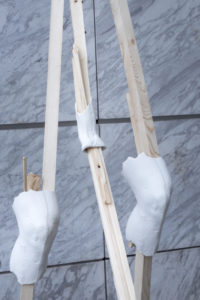 That is why its work is eminently political. Not in its message but in the construction of a space for social interaction. Servanin’s sculptures do not have the gift of language. Yet, even without words, they explain the relationships they have with their bodies and their environment. More than a sculptor, the artist is here a creator of social environments. A demiurge, father of a universe that is an echo of ours.

Florian Mermin or the elegiac domains

Stay tuned of Jeunes Critiques d’Art // Paris news and posts by suscribing to our nesletter :