Reflection on Identity: Iranian Artists at the Pergamon

The first time I moved to Berlin, I went directly to the Pergamon Museum. I had dreams in my head. Dreams about the Ishtar Gate and the Mshatta Hall. The first time I went to Iran, I travelled all around the country and ended up in Tehran. I spent my days there hanging out in art galleries, looking at contemporary art.
Time to time, I would go to the Pergamon Museum, walking around. Inevitably my feet direct me  in front of my two dreamy architectural pieces – almost like a ritual. A month ago I went there again and surprisingly (for me) an exhibition dedicated to Iranian photographs was presented in front of the Mshatta Hall. Iranian contemporary art and the Mshatta Hall gathered.
Entitled Capturing Iran’s Past the exhibition was presenting the photographs of four contemporary Iranian artists, who through their artworks are staging the past in the present, or vice-versa. 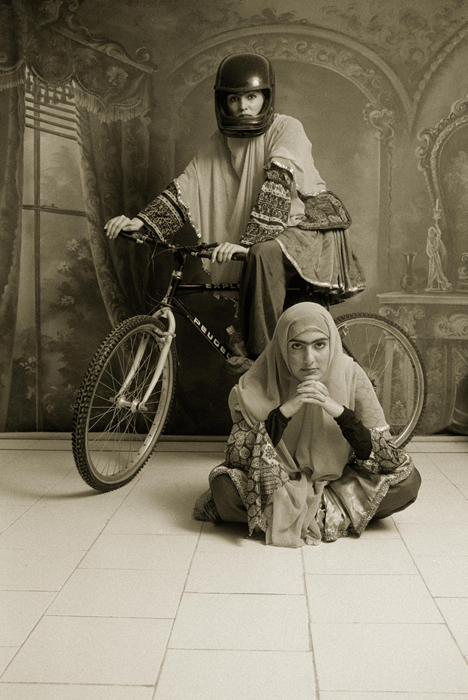 Shadi Ghadirian, in her Qajar series from 1998, realized portraits of contemporary women, which are staged to look like the portraits from the 19th century during the Qajar period (1779-1925). Inside each photograph, she placed an anachronic object from our time, such as a soda can or sunglasses. With the Qajar photographs, she became famous in the West. In the 90s the Qajar photographs have been travelling for two years in the West. Why such an interest? Probably because at that time, which was post 1979 and the Iranian Revolution, the image of Iran was very negative in the West, especially regarding women’s status. The only pictures that the western public could have in mind were that of the revolution, the war (Iran-Irak war 1980-1988), the Ayatollah, women wearing the abaya. Even today recent events happening in Iran do not give a « positive » image of the country, such as the violent repression of the demonstrations in November 2019.
In Ghadirian’s pictures, even if it portrays women staged like in the Qajar period, the contemporary elements present in the photographs show to the public that women have access to objects from the West. Women can listen to music, ride bikes, wear fancy sunglasses, read, be an artist, use makeup. So through these pictures the western public had the possibility to see another image of  Iran – a private image, behind the door of the house. In her pictures Ghadirian shows the paradoxical life of the Iranian women during the 90s: the anachronic objects are officially forbidden in Iran, but they are used inside the house. These pictures witness the dichotomy lived by these women in the 90s – and in a certain way still today – : women are stuck between tradition and modernity.

In the same vein, Najaf Shokri in Irandokht (2006) – daughter of Iran – presents ID photographs issued in 1942, that he found in a bin outside a branch of the National Civil Registrations Organisation. These passport photographs were issued during the Pahlavi dynasty (1925-1979). These objets trouvés witness a bygone past, when the Iranian women didn’t have to wear the hijab. It witnesses to the transformation of the Iranian society, its modernization and westernization. In 1935 a law has been voted, the Kashf-e hijab, to forbid the wearing of the hijab outside the house. With the Iranian Revolution, the wearing of the hijab has been reimposed.

The two artists witness different moments of the Iranian history: the 19th century with the Qajar period, when women were still wearing the hijab and the middle of the 20th century when the hijab has been forbidden in public spaces. They witness, in a certain way, moments of modernity in the country. Ghadirian reminds us about a period of modernity of the Persian Empire, under the rule of Nasir al-Din Shah, who developed a passion for new technology, especially photography. She was inspired for her series by photographs from that time, personal archives of the Shah, who took pictures of women in the palace. She stages two contradictory periods in her pictures: one, when the Shah had an interest for the West, another, the contemporary one, when the West is seen as « evil » and objects from there are officially forbidden. Objects of modernity. Objects of western consumption. It could be seen as the juxtaposition of two antagonist periods: Monarchy against Republic ; Westernization against anti-westernization.
In another way Shokri pictures remind us of the influence of the west. At that time, under the rule of Pahlavi Shah, women were not only not wearing the hijab, they also followed the fashion from the West.

One other important part of the history of Iran has been illustrated by Taraneh Hemami, in Hall of Reflections (2000-2012). Like Najaf Shokri, she uses anonymous photographs and letters that she transformed in assembled mirrors to witness the process of displacement and immigration of Iranians to the US . These « sculptures » show the difficulty that immigrants face with concern about belonging. Belonging to their country of origin, that they left. Belonging to their new country, where they immigrated. It reflects the tugging of belonging to two places: two languages, two cultures. After the Iranian revolution, a lot of Iranians immigrated to the West, especially to the US.
Being Iranian-American, she also reflects her own story through her artworks. Therefore, individual stories illustrated by letters and photographs of people, allow her to give a bigger picture. Small histories are witnessing the History of Iran and its diaspora.

Exhibiting these artists in the Museum für Islamische Kunst beside the objects of the Islamic civilisation, instead of presenting their works at the Hamburger Bahnhof – museum dedicated to contemporary art – is quite interesting.
The artists are making references to a vanished past. Najaf Shokri said that with Irandokht he wanted to « transform expired documents into public heritage ».
Through portraits of anonymous persons, the photographs illustrate and witness the recent history of Iran. A history that could be forgotten, like the ID photographies of Najaf Shokri. Thus exhibiting the work of these artists, beside ancient Islamic art objects makes sense. The curators create a dialogue between the recent history of the 20th century and the ancient history of Islamic civilisations, in which Iranian heritage belongs. Like the museum, by collecting and presenting objects, the artists preserve the memory and the heritage of Iran through their works.

Heritage is essential to a society, a nation, a country and an individual to create his identity. The photographs are questioning this notion of identity: the search and the lost, the present and the past. Like Taraneh Hemami’s pieces of mirrors, the identity of a country, but also of a person, is made of multiples pieces, which are assembled. History, at different levels – personal or common – is essential to forge an identity. The museum is the temple of the history of the world, because it preserves objects of the past, witnessing moments of a particular history, like the artists in their works in this exhibition.