Helga Sophia Goetze’s work is often referred to and read as Art Brut. She described herself as “the greatest living poet” and her poems, as well as the “over 30,000 typewritten A4 pages of daily records of her experiences, her reading, her insights, are an invaluable mirror of our times.”1 She sometimes said of herself: “I know I am too much”.

Helga Goetze (1922-2008) lived in Hamburg with her husband and seven children until a major break in 1968. During a family holiday, she spent a night with a new acquaintance named Giovanni. She wrote in a notebook: “In 1968 I experienced my ‘out’ in Sicily with the permission of the understanding husband”. This experience represented a new beginning for her and she broke out of her life as a housewife. She lived in Hamburg in a shared flat with free sex and communal property and moved to Berlin in 1978. In 1973 she published the book “Hausfrau der Nation oder Deutschlands Supersau?” (Housewife of the Nation or Germany’s Super Sow?), in which she retrospectively explored her breakout through poetry. She received international attention with her provocative writings and performances. From 1983 until shortly before her death on 29 January 2008, she stood every day in front of the Memorial Church Kaiser Wilhelm in Berlin Charlottenburg. While doing so, she wore a coat she had embroidered herself and shouted to passers-by: “Fuck/love” – “The orgasm of the goddess is peace”, “Who perceives the sexual distress of young men and women over 30?”. In 1976 she was called “Scandal of the Year” when she was a guest on a talk show and stripped naked. “What do I have to be ashamed of? My body is my church, through it I feel and breathe.”2

It is mainly (but not exclusively) Art Brut institutions that have shown Helga Goetze’s works and acknowledged her work. Helga Goetze’s first solo exhibition, “Was ist eine Frau? – Weg eines Aufbruchs”3, took place in 2006 at the Studio Gallery of the Haus am Lützowplatz in Berlin and was curated by Karin Pott, who was the director of the house. In 2007, the Collection de l’Art Brut in Lausanne received five of her most important embroideries as part of a donation made with the artist’s consent and through the commitment of Karin Pott and the museum’s director Lucienne Peiry. In 2021, the Berlin gallery Art Cru dedicated her a solo exhibition, also curated by Karin Pott4. Until 25 September, works by her can be seen in the exhibition “Art Brut Ornaments” curated by Lucienne Peiry at the Musée des Beaux-Arts of Le Locle, in Switzerland5. In order to understand why Helga Goetze is often considered an Art Brut artist, this term should first be defined:

“It is self-taught creators who produce Art Brut, people on the fringes of society who harbor a spirit of rebellion and tend to be impervious to collective standards and values. They create in total disregard of public acclaim or other people’s opinions. They seek neither recognition by others nor public acclaim: any universe that they create is meant exclusively for themselves. Using generally unprecedented means and materials, they are in no way obligated to any artistic traditions, preferring to avail themselves of highly singular figurative means.

The concept of Art Brut stems from the French painter Jean Dubuffet who, from 1945, assembled a collection of objects created by the inmates of various psychiatric hospitals and prisons—solitary or outcast persons. In their creations, he saw ‘an entirely pure, raw artistic operation that the creator fully reinvents in all its phases , as spurred uniquely by his own impulses.’ The idea of Art Brut is thus based on certain social characteristics and aesthetic peculiarities.”6

What distinguishes Helga Goetze in the first place is the unwavering persistence with which she worked to overcome the heaviest social taboos. Above all, the portrayal of sexuality as an act of liberation and empowerment – especially for women – is central to her multimedial practice. Her texts and images convey strong statements such as “Fucking is peace”, “My ass purrs” or “Mothers are losers – integrally”7, which remain in the memory due to their provocative nature.

These statements, which may seem agitating, are nevertheless not representative of Helga Goetze’s literary work as a whole. For language is the central element of her practice par excellence. Whether in her embroideries, drawings, poems, or in her activist projects, Helga Goetze placed a great emphasis on words. Language was her fundamental material, with which she played brilliantly. Depending on what she aimed for, she would juggle not only the means of expression (street action, embroidery, literature, drawing), but also literary styles. And she often allowed different registers of language to meet within one work, just as she merged different types of representation that she did not think of as contradictory. Thus, sexual and religious representations (mostly Christian or mythological themes) were often juxtaposed. 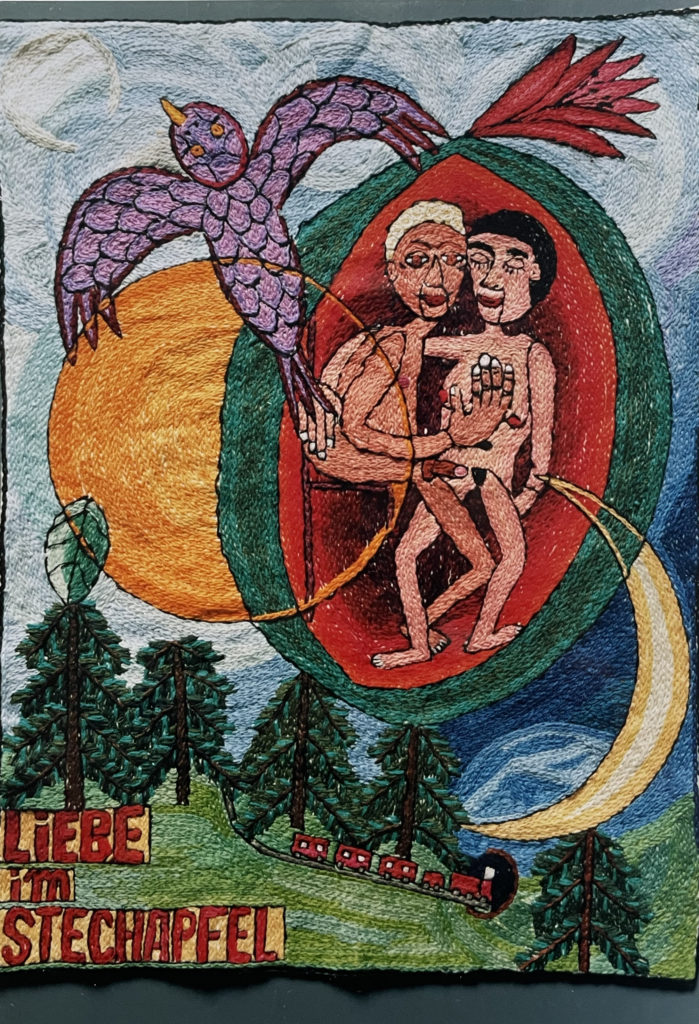 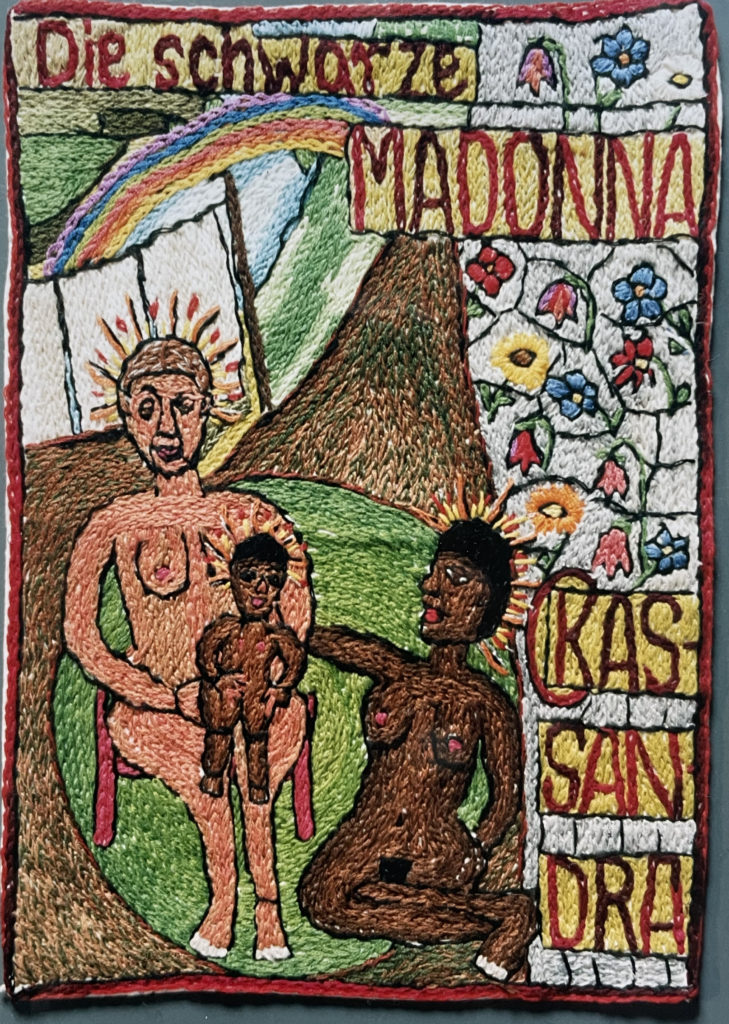 Helga Goetze stitched together elements that Western societies stubbornly want to separate and keep far apart. She worked at a very concrete rapprochement, even a reconciliation, which was physically expressed in her embroideries with thick thread. A reconciliation between sexuality and spirituality, between naked – female – bodies and a sense of freedom (instead of shame), between physical love and peace. 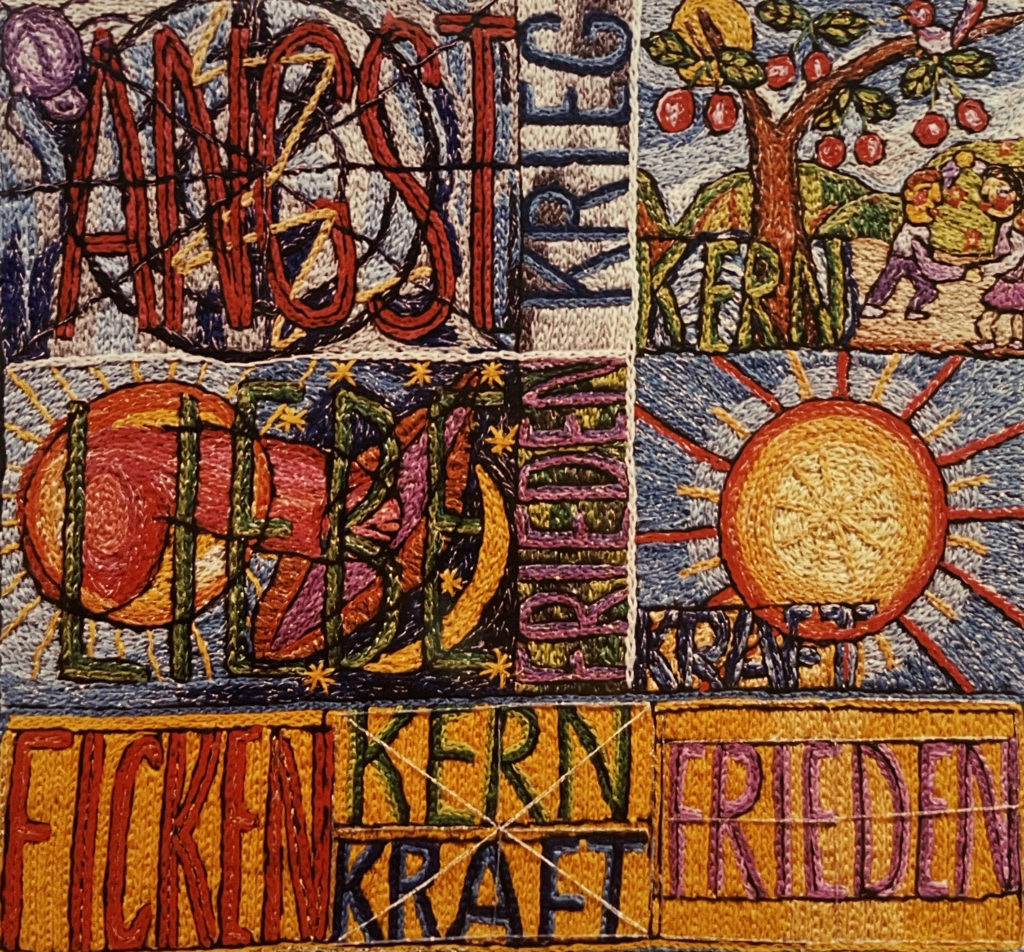 A reconciliation that had to take place on the physical level and that served peace and an intelligent emancipation of humankind. Helga Goetze wrote in one of her many notebooks where she connected her structured thoughts together with reproductions of her embroideries:

“THE MOTHERLY has no care in the PATRIARCHY. (Emancipation of the Feminine means: to become a MAN. I will not tolerate THAT).”

And a few pages further on:

She even transferred the latter sentence to a large-format embroidery. 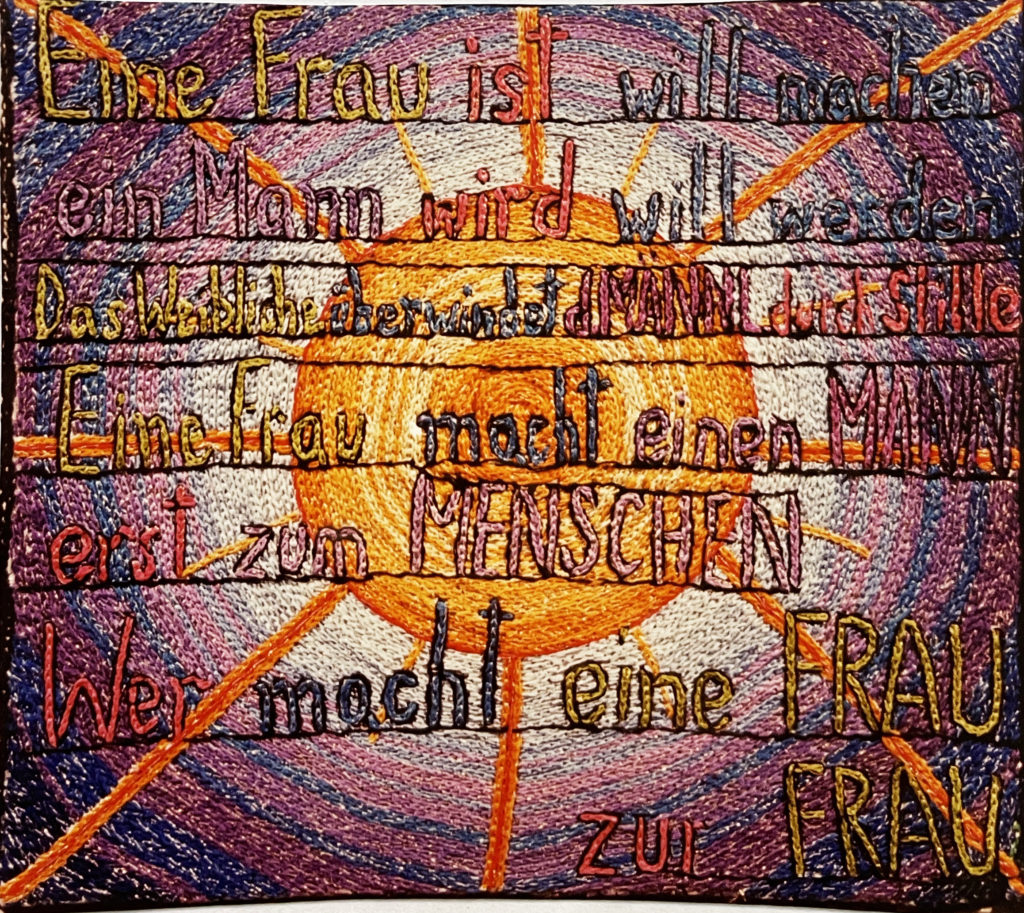 Through her humorous, at times provocative, at times tender language, Helga Goetze tried in all honesty to encourage everyone to practise a free sexuality in their everyday life because from her experience it was the starting point for mental liberation. She considered it the prerequisite for equal rights for women* and men* and for a better society. She shared this view with most of the artists of Viennese Actionism9, with whom Helga Goetze was in active exchange. 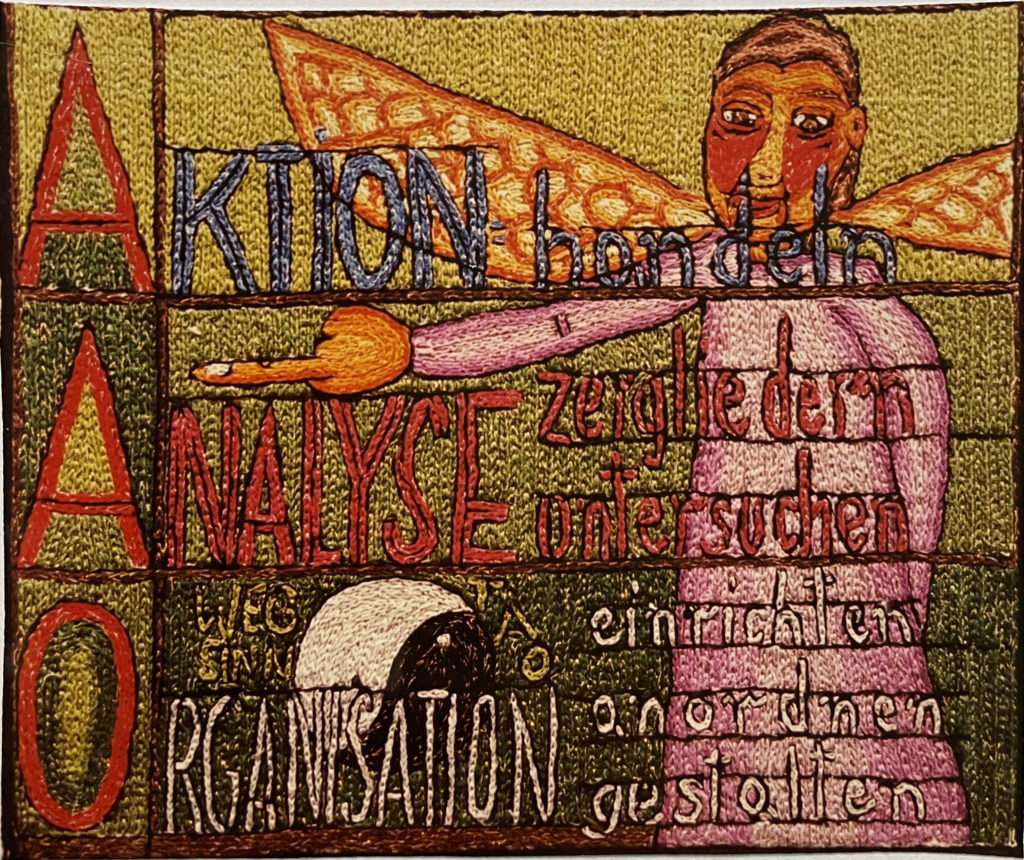 In 1975, Helga Goetze went as a guest to Friedrichshof in Austria, where she lived for a short time in the Action Analytical Organisation (AAO) founded by Otto Muehle. This experience left a strong impression and was particularly inspiring for Helga Goetze because the AAO carried a social project which she had already tried to initiate herself. Until 1983 she visited the AAO groups in Hamburg and Berlin and until her death she corresponded regularly with Otto Muehl, even while he was in prison10.

In 1983 Helga Goetze founded the “Geni(t)ale Universität” in Berlin. A project that was very much influenced by her experiences with the AAO artists. Unlike most Art Brut authors who work in isolation, Helga Goetze’s practice thrived on her numerous and very active networks with her fellow contemporaries.

In that sense, she was self-taught, yet extremely educated and had a high understanding of all the complex power structures that shape patriarchal, capitalist society. And precisely because she belonged to such a society, where classism and sexism prevail, her empirical, non-academic and non-professional art was not given full appreciation. Today, her practice is still not acknowledged on the same level as that of graduated artists.

It is true that she can be called an outsider because her positions and her openness constituted a break with the mainstream. Nevertheless, the categorisation as Art Brut can be problematic insofar as it can tend to downplay or even hide the sharpness of her political statement. There were many feminist voices at the time that were growing louder and resonating with Goetze’s positions. Even in the context of the art scene, her practice was not much more radical than that of the more recognised artists. If one thinks not only of the AAO, but also of Viennese Actionism, Fluxus, or even more generally of the concept of Body Art, which had already become popular in the 1960s, one has to conclude that Helga Goetze’s work was no more provocative than that of Marina Abramović, Gina Pane or ORLAN. Except that she did not have an academic background. Helga Goetze was very aware of this, and for that very reason she actively worked on her network in order to spread her word.

The argument that she was self-taught and therefore would have made Art Brut can also be questioned. Apart from the fact that her practice was not free of influences from traditional art, Helga Goetze had learned embroidery like any housewife of the time. In this sense, she had not invented a technique like numerous Art Brut artists did11. Although this knowledge did not stem from any art school, it should not be disqualified for this reason. Helga Goetze’s creativity consisted in the fact that she used this feminised* technique in a subverted way to parody the patriarchy. Thus, it seems difficult to categorically classify her as Art-Brut-Artist for the reason that she was self-taught and radical in her practice. Even if this classification does not aim for a strict separation from conventional art and is rather about bringing to light the originality of her art.

This affiliation of Helga Goetze with Art Brut raises the question of the boundaries between Art Brut and contemporary art, which began to blur as early as the 1960s. From the beginning, the complexity of Art Brut was that there could be no fixed criteria of belonging. After all, it is not an art movement, but a categorisation that transcends epochs. Gradually, more traditional art institutions began to take Art Brut seriously, which in turn was allowed to be reflected in the art market – where Art Brut may not be valued the same as traditional art, but at least has its place. The fact that Art Brut was given more space and visibility became manifest, for example, with Documenta 5, where Art Brut works were exhibited for the first time in 197212. More and more museums, private collections, art foundations and fairs receive and represent Art Brut works in the same way as traditional art. Bridges are built; This generates a mutual influence between contemporary art and Art Brut. Helga Goetze’s garments, which she had embroidered herself and with which she stood in front of the Kaiser Wilhelm Memorial Church in Berlin, are currently part of the exhibition “Art Brut Ornaments” curated by Lucienne Peiry at the Musée des Beaux Arts of Le Locle in Switzerland13. The fact that Helga Goetze’s work is being shown primarily as Art Brut should definitely not be judged negatively. Helga Goetze seems to embody precisely this complex and fascinating  interference.

“The witch who makes a fool of herself is to be taken seriously.”
– Helga Sophia Goetze

Protect Me From What I Don’t Want

“Where are the borders?” An interview with Paola Yacoub
0
Recommend
Share