“Where are the borders?” An interview with Paola Yacoub

After having written a text on Paola Yacoub’s exhibition at the daadgalerie1 I was eager to meet her. She invited me to her studio with large windows, in Moabit, where I spent an afternoon in December. I wanted her to explain certain aspects of her work, certain paths that had defined her practice. And since I had expressed a rather personal interpretation of her exhibition, I was curious to establish a dialogue between my understanding and her intentions. This exchange was very rich and brought us very close. It was particularly fertile in that it allowed us to question each other on certain aspects of creation and reception that we may have missed. Paola Yacoub guided me by clearly defining the context of her practice (her references, her artistic background) and by offering me to see her work in all its diversity, well beyond the pieces I had discovered at the daadgalerie.

One of the first subjects we discussed shortly after I arrived in the studio was the central piece of the exhibition at the daadgalerie: A great carpet woven by the Manufacture des Gobelins, which came into the possession of the French Embassy in Berlin shortly after the end of the exhibition. Thus we were both very keen to talk about this important work.

As an object, the carpet has a long and rich history of cultural and esthetic traditions. Paola Yacoub likes to use the term “typology” to talk about the different kinds of carpets. Carpets can have different functions (devotional, ornamental, utilitarian, symbolic) and there are different aesthetics, often related to different traditional know-how. In Iran, for instance, tapestries are the carrier of narrative representations with strong symbolic value. Paola Yacoub refers to Mohsen Makhmalbaf’s film Gabbeh, among others: “There is emotion, a story, behind the weaving of a carpet. A carpet is a landscape and then it is a transposition of territories, a game with territories.”

With her work, Paola Yacoub wished to open up a new typology, which could be called documentary carpet. Indeed, the iconographic programme of her work is far from any traditional representation: it is a technical drawing that Paola Yacoub made in 1995 during important archaeological excavations in Beirut2 and that she transmitted to the Manufacture des Gobelins in order to transpose it on a carpet. The Manufacture des Gobelins, which is a famous French institution, works since several centuries with traditional know-how. “The carpet was sent to Lodève, in the South of France, to a spinning factory that employs Kabyle weavers3. These workers, wives of Algerian Harkis, master a very particular knotting technique.” Thus, although Paola Yacoub innovates by proposing a new typology of representation, she nonetheless anchors her work in tradition (by calling on the Manufacture des Gobelins) and in history (by making it carry the transposition of an archaeological document). In a sense, as she points out, it is almost a romantic approach: this carpet reflects both a fascination for archaeology – which emerged as a practice in the 19th century, during the golden age of Romanticism – and, if we refer to it pragmatically as one of its utilitarian functions, it embodies the idea of  “marching on history”.  “Romanticism was the first time we became aware of the ground: it was the age of the first archaeological and geological expeditions.”

Where is the difference, then, between document and work of art? The shift from one to the other is made in particular by removing the scientific character of the document. Indeed, as she rightly pointed out to me, Paola Yacoub has removed from the carpet the legend that indicated the scale on the original drawing. Therefore, the representation remains that of a document, but by losing the notion of scale, it loses its scientific value. Thus there has been a shift to another dimension, a transposition which, in the Aristotelian sense4, brings the object onto the artistic realm.

Ornamental and traditional object, work of art, document: by being all of these at once, this piece does not only offer a new type of carpet. It confronts viewers with a number of questions about what a document, a work of art and a piece of decorative art are. Paola Yacoub questions the similarities and explores the porosities that exist between these three genres. It is also in this sense that she juggles typologies. From her architectural studies in London, she says she got the ability to play. Thus she played with this document. “Play, in the sense of experimenting, is very present in my work.” The woven archaeological drawing reveals the undergrounds that the carpet, laid on the floor, covers and hides. By doing so, Paola Yacoub tells a lot about the history of Beirut without pathos. “In a way, you can say that there is no dramatic narration of history, but that there is a dramatisation.”

Referring to Michael Fried’s5 and Walter Benn Michaels’6 writings, the artist wants to “return to the author’s intention”. “There are paintings that call for theatricality, that are spectacular in their depiction and where the expression of the portrayed character is engaging; And there is another type of works where the gaze of the depicted person, who is writing or reading in the painting, is not theatrical: the person is not looking at the viewer.” In works such as the carpet BEY002 or the photographs series Radical Grounds and Photos Élégiaques, war is central and yet never spectacularly depicted. 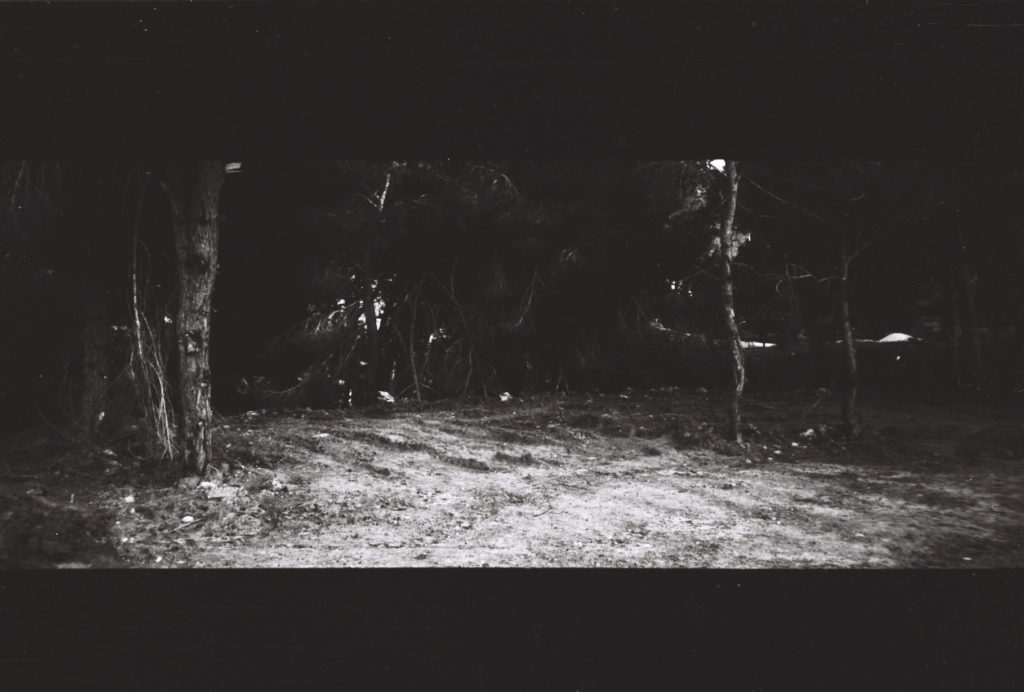 Radical Grounds is a series of photographs of grounds, first presented at Marfa’ Projects gallery in Beirut in 20207. The images confront the viewer with the ground of a territory scarred by war. They are, in a sense, documents that allow us to read the photographer’s perspective, her exact physical position in relation to the ground on which she is anchored. The photographs are evidence of the physical existence and vulnerability of the person behind the lens. If the ground would have collapsed at that moment and in that unsafe place, the photographer would have collapsed too. Unlike aerial shots taken by drones for military purposes, Yacoub’s photographs are intended to literally embody the trace of an anchor to the ground. “They bear witness to the fear, the feeling of vulnerability, but without dramatizing the war. I wanted to show the pain without having to prove it in an overdramatic or theatrical way. I have another example here, look: It looks like an elegiac photo, a landscape in Tuscany. And this is actually the border between Lebanon and Israel. So it’s a play on appearances: I wanted to talk about pain without trace. It’s the pain of a territory: it’s a minefield.”

As Paola Yacoub explains on several occasions, her works all come from the practice of documentary photography. In this sense, the clarity of her intentions is crucial to understand the aesthetical and political engagements of her work. “I consider that I am qualified to deal with documents because I come from a scientific approach.” The many years of archaeological excavations in Beirut, while confirming her interest for the grounds, also sharpened the political meaning of her scientific approach. “Archaeology is about managing documents. There is a real need to position oneself in relation to this. However, there is often no difference between what the Lebanese political class says and the work of an artist who wants to be politically committed but who plays the game of fiction with documents. Why is this? Because there are no public archives in Lebanon. The post-war amnesty has brought us to a situation where yesterday’s criminals are in power today. And there we are: every time we want to make a real documentary practice, death is threatening. Lokman Slim has been an example of this8. Some works by Lebanese artists go along and play their game: when they show a document that comes from the war, they maintain a certain ambiguity by considering the document as neither completely truthful nor completely fictitious. Anyway there would be no institution able to trace the history of the document since there is no national archive. This sceptical posture of the artists is a hindrance to the investigation of the country’s history. The archaeological documents that I exhibit have a different status: they are completely assumed as documents. In my drawing, one can verify that it belongs to the French Institute of Archaeology.”

Consequently, it is a militant act to devote oneself body and soul to archaeological research in Lebanon. This posture is contrary to that of the generation of artists to which Paola Yacoub belongs and from which she tries to distance herself. She feels closer to the young generation who, after the revolution, sees the need to give credit to historical documents and to take a critical attitude towards the country’s politics. “By approaching the history of Lebanon through archaeology, I want to get out of the sceptical posture towards documents which has been typical of my generation. I feel closer to the young actors of the revolution, who try like me to break with this conventional scepticism. So there was a very political aspect to my exhibition at the daadgalerie. Moreover I chose to invite Art of Boo9: for the first time in the Lebanese press, political actors are named and criticised at the same time. Art of Boo is an artist who dares to make judgements and criticise reality. His work embodies a young generation that is emancipating itself, that wants to bring the country to a real democracy.”

A large number of Art of Boo cartoons were displayed on one of the first walls of the daadgalerie. I remember that this was the very element that invited me to take a political look at the content of the exhibition. Being confronted with explicit political statements expressed in a cynical and scathing humour from the very beginning of my visit, I was forced to consider the works beyond their poetic quality and to read in them a committed statement. However, it was only while speaking with Paola Yacoub that I really understood her fierce intention to give credit to historical documents. More than that, her determination to denounce the problems caused by the absence of a national archive in Lebanon, which paralyses any possibility of investigating the past and healing the individual and collective wounds that have been caused by the civil war.

1 Paola Yacoub. BEY002, from 8 July to 19 September 2021, Daadgalerie, Berlin. https://www.berliner-kuenstlerprogramm.de/en/events/bey002/
The exhibtion review is available here: https://www.pokusberlin.com/an-beirut/2/
2 Paola Yacoub worked on the Beirut archeological excavation site from 1993 to 1999. These excavations, led by the Institut Français d’Archéologie du Proche-Orient (IFPAO), were carried out in two sectors of the city (BEY002 and BEY026) and are one of the greatest archeological excavations in an urban area.
3 The word “Harkis” refers to Algerian Muslims who served the French army during the Algerian War (1954-1962).
4 Aristotle, Poetics.
5 Michael Fried, Absorption and Theatricality: Painting and Beholder in the Age of Diderot, 1980 et Art and Objecthood: Essays and Reviews,1998
6 e. g. Walter Benn Michaels, Neoliberal Aesthetics: Fried, Rancière and the Form of the Photograph, published on 01/25/2011 and available online: https://nonsite.org/neoliberal-aesthetics-fried-ranciere-and-the-form-of-the-photograph/
Walter Benn Michaels participated in several ARP Talks (a program that has been founded and led by Paola Yacoub from 2013 to 2018 at the ALBA and in collaboration with the Sursock Museum in Beirut).
https://sursock.museum/content/arp-talks-walter-benn-michaels-and-jennifer-ashton
https://sursock.museum/content/arp-talks-walter-benn-michaels
7  https://marfaprojects.com/exhibitions/paola-yacoub-radical-grounds/
8 Lokman Slim, an activist Lebanese publisher, was assassinated on 4 February 2021.
9 Art of Boo’s cartoons are published in the French-speaking Lebanese daily L’Orient-le-Jour, among others. https://www.theartofboo.com

Protect Me From What I Don’t Want