In front of the artist stands a table consisting of frames and a board on which stands a transparent bowl that plays the role of a fruit bowl. Inside, five exotic fruits: pineapple, bananas, avocado, mango, pomegranate.

Silence of the audience. Banana, mango, avocado, pomegranate, pineapple. Like a litany, the artist repeats these words tirelessly and points to each of the fruits one after the other. The order is different. The movement of his hand is always the same. A finger stretches towards the fruit, the name of which is then mentioned. Here, it is a question of denomination. An object X has a name. As time goes on, the meaning of this word disappears for me. The artist’s litany becomes my own litany. While he’s running out of breath vocally, I’m running out of breath mentally. The names merge together. Then the artist stumbles on a word, stops. He looks at us, the silent public. 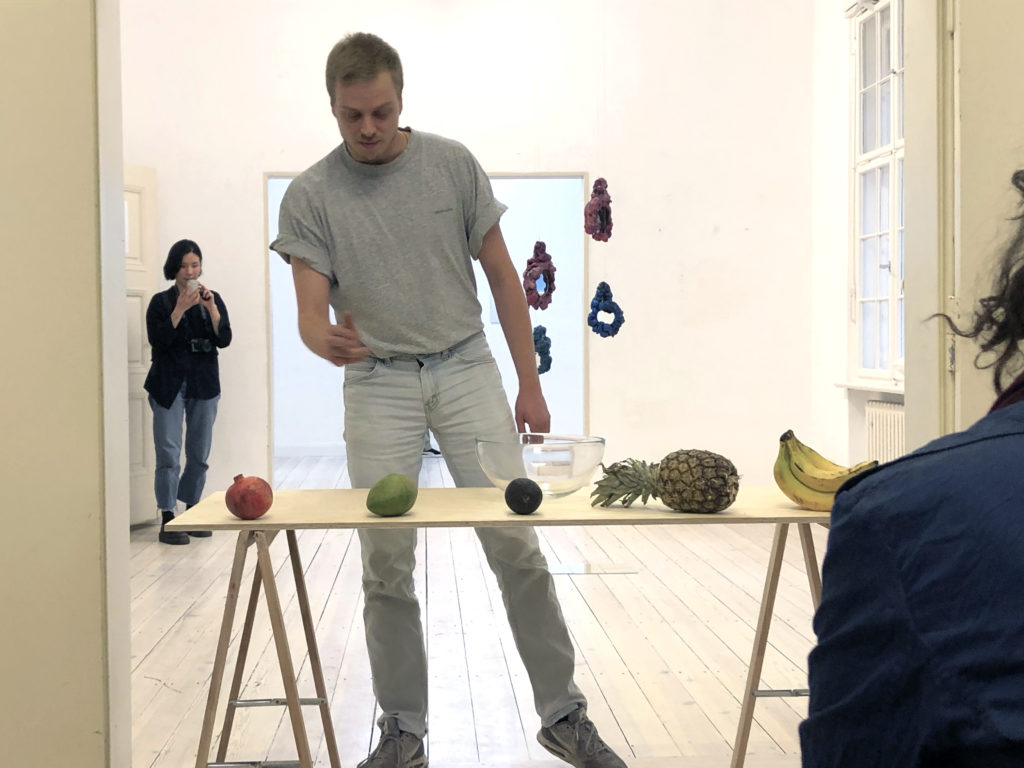 He takes out the fruits one by one, places them on the table in a straight line facing him and us. Between each fruit there is a space, almost measured. Satisfied with his disposition, he raises his head and looks at us. Breathes in. Raises his arm, point his finger and… Avocado, banana, pomegranate, pineapple, mango. The enumeration starts again. This time identical. Faster and faster. After a while he no longer looks at the fruits, but watches us continue to point out each fruit by naming it. Automatic learning. It reminds me of the way I learn a piece of music. First read the notes and play them following the score. Then repeat these notes over and over again to memorize them. The fingers memorize the position of the notes on the piano keyboard. The brain memorizes the gestures: where each key on the keyboard is located. My ears record the sound and can recognize an error.

The artist shows here a performance of memory through repetition. The brain is recording. Sometimes he fails.

The artist tries again a new combination by moving the fruits but also by positioning them differently. The pineapple, that was lying down, is now standing up. 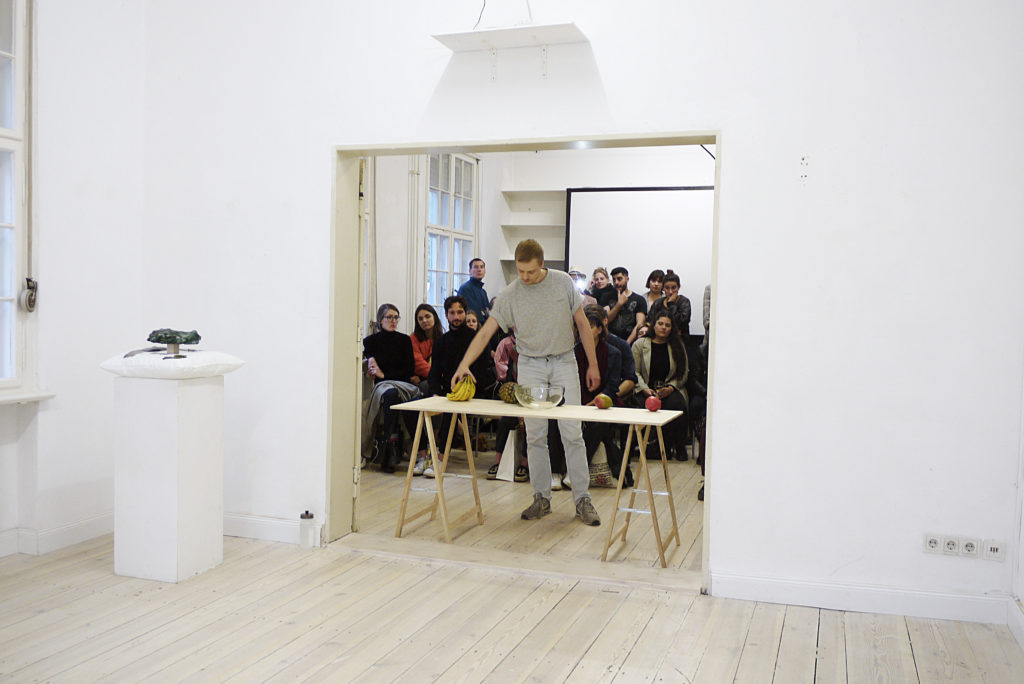 In the audience some laughter and smiles. Humor? Hindrance? Boredom? It’s almost a comedy of situation. Faced with the concentration of the artist who does not weaken, we weaken. We let our emotions overwhelm us. But here we are talking about control. Mechanics. Almost robotic. The artist tirelessly carries out the same gesture. Speaks the same words over and over again, but does not express emotions. He failed, but did it again and again. Trying other possible configurations.

It also refers to childhood and language learning. When we learn the names of the objects, our parents tirelessly make us repeat by pointing to the name of an object. The curved yellow fruit is a banana. Repetition is the basis of language learning. Likewise, when we learn a foreign language, we start this process over again. It is the basis of the language that everything has a name, a designation. Here, Torben Jost achieves a linguistic performance. He shows that everything has a name, but this designation only makes sense for people who speak the language. The tireless repetition of the fruits gradually takes away their meaning. They are no longer fruits but objects with a name. I see these fruits but I no longer identify them as such. I even wonder what this object is in front of me. A name. But what does that name mean? I am confused.

Then: tired? Disappointed? Defeated? Torben Jost puts the fruit back in the bowl. Drinks some water. Watches us. Does it again. That still doesn’t seem to satisfy him. He stumbles on a word. Stops. Drinks. Pulls a supermarket receipt out of his jeans pocket. Reads it. Memorizes it. Lifts his head up. Raises his finger. Points his finger at a fruit. Says a number. 1.90; 1.20; 1.20; 1.70… Objects are no longer designated by name but by value. Gradually the fruit no longer has a meaning of fruit, something that is identified with food, but at a price. Is this a criticism of our society? Does he emphasize that in the end the name of a thing no longer means anything but that it is its value that is important and therefore significant? 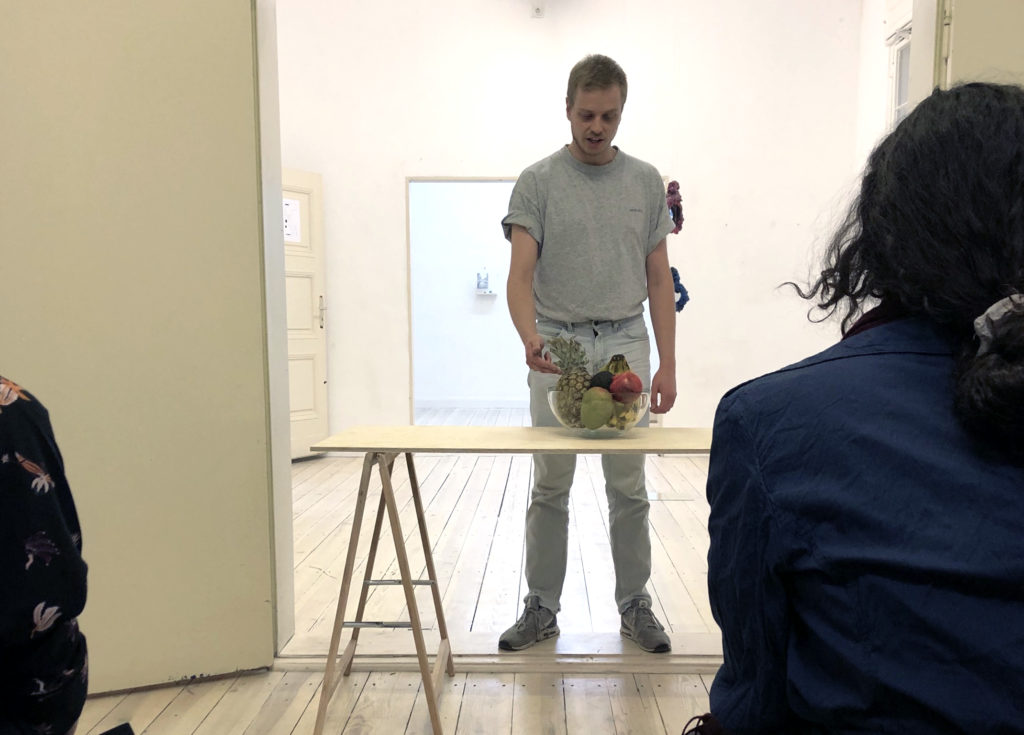 He follows the list repeats these numbers over and over again. The figures are mixed up. Out of breath. Exhausted. He stops. Drink. Watches us. Start over: Avocado, banana, mango, pomegranate, pineapple. Stumbles over a word. Stops. Watches us. Leaves the bowl. Turns away from us. Gets out.